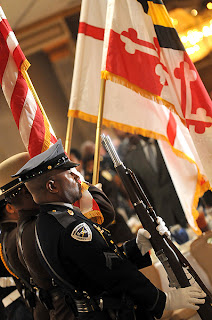 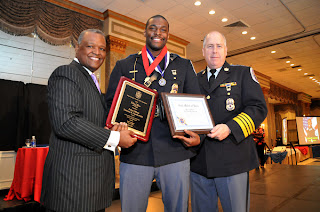 Corporal Phillip D. Foster
Gold Medal of Valor
On November 12, 2011, patrol officers were dispatched to Rydal Road in Forestville to assist Anne Arundel County Police with a homicide investigation.  Our patrol officers were asked to secure a residence at that location while a search warrant was being obtained.  Officers were not aware that the homicide suspect could be inside the home.  While officers set up a perimeter around the residence, the suspect suddenly opened the front door and began walking to his vehicle.   When he saw the officers, he went back inside his home. Moments later, the suspect came back out, this time carrying a shotgun in one hand and a rifle in the other.  Officers ordered the suspect to drop his weapons and he seemed to be complying as he placed his weapons on the ground.  Then without warning, the suspect reached down and fired the shotgun.  The blast struck Corporal Foster in his face, hand and leg.  Officers on the scene returned fire, however, the suspect continued to fire additional rounds from his weapons.  Despite being seriously injured, Corporal Foster also returned fire during the violent gun exchange. The suspect was mortally wounded.  For his courageous actions and unrelenting determination while exposed to extreme  danger, Corporal Foster earned a Gold Medal of Valor.
Corporal Phillip Foster


Corporal Julian R. Mitchell
Silver Medal of Valor
Corporal Travis A. Rickert
Bronze Medal of Valor
On the night of August 3, 2011, members of the District III Special Assignment Team learned that a suspect armed with a handgun was in the area of 1600 Marblewood Avenue in Fairmont Heights.  Corporals Rickert and Mitchell located and approached the suspect, who tried to run away.  As the officers were chasing the first suspect, a second suspect appeared from behind a bush and began shooting at the pursuing officers, hitting Corporal Mitchell in his left arm.  Corporal Rickert returned fire and struck the suspect, who then ran into a wooded area.  Despite his injuries, Corporal Mitchell along with Corporal Rickert, pursued the armed gunman into the wood line where he was captured and arrested.  Three additional suspects were ultimately arrested.  Corporals Mitchell and Rickert’s heroic actions removed four dangerous felons from our community.

Corporal Corey Truxon
Bronze Medal of Valor
On the evening of November 25, 2011, patrol officers responded to the 21,000 block of Aquasco Road in Aquasco for the call of an armed man threatening suicide. The man said he would try and force the police to shoot him because he could not shoot himself.  Armed with two handguns, the man exited his home and fired a shot.  He went back inside, but quickly returned and aggressively approached the patrol officers.  Still carrying the two guns, the suspect deliberately moved toward the officers, posing an immanent threat.  Corporal Truxon was forced to take action to protect his life and the lives of his fellow officers.  Corporal Truxon’s courageous and decisive actions were directly responsible for bringing this volatile situation to an end.
Corporal Corey Truxon

Corporal Matthew Ling
Corporal Eric Lee
Police Officer First Class Jonathan Eyler
Police Officer DAniel Gonzalez
Bronze Medal of Valor
On February 4, 2012, Corporals Ling and Lee, Police Officer First Class Eyler and Police Officer Gonzales were on patrol in the College Park area when they saw smoke billowing from a window at the Spellman House apartment building on Berwyn House Road.  The officers knew the building housed many senior citizens and residents with special needs.  Without hesitation, the officers rushed inside and up to the sixth floor where the fire appeared to have started.  They searched the burning apartment and then went door-to-door to alert and escort residents to safety.  These four officers took great personal risk to protect the lives of others, and prevent, what would likely have been a tragic loss of life.

Lieutenant Edward Finn
Corporal Rickie Adey
Bronze Medal of Valor
On the evening of July 24, 2012, Lieutenant Finn was on patrol in the District Heights area when he spotted an apartment building on Rochelle Avenue engulfed in flames.  Corporal Adey arrived within seconds and both officers entered the burning building and began a door-to-door search.  After escorting several residents and their pets to safety, they learned of an elderly resident still trapped inside.  They rushed to her apartment, forced open the door and found her sleeping in the rear of the apartment.  Thanks to Lieutenant Finn and Corporal Adey’s heroic actions, all of the residents were safely rescued from the fire.


Posted by Prince George's County Police at 11:59 AM