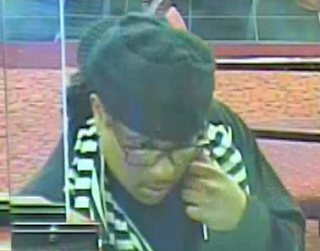 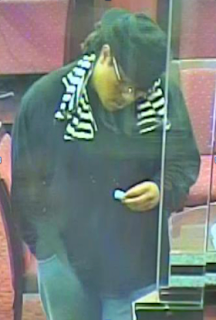 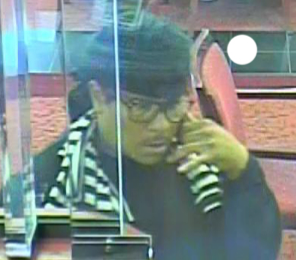 The Prince George’s County Police Department is working to identify the suspect seen in the above surveillance photographs.  Detectives believe the suspect is responsible for two recent bank robberies.

The most recent robbery took place on April 15, 2013, at approximately 2:50 pm.  The suspect robbed the Capital One Bank in the 3600 block of St. Barnabas Road in Suitland.
He is described as a black male with a light complexion, in his late 20's. He wore a black shirt, black hat, blue jeans, and a black and white striped scarf.


Detectives believe the same man robbed the SunTrust Bank in the 8900 block of Woodyard Road in Clinton on March 20, 2013.

Anyone with information on this investigation is asked to call the CID Robbery Unit at 301-772-4905. Callers can remain anonymous by calling CRIME SOLVERS at 1-866-411-TIPS (8477). You may also text “PGPD plus your tips” to CRIMES (274637) on your cell phone or go to www.pgpolice.org and submit a tip online. Crime Solvers is offering a cash reward up to $1000 for tips that lead to an arrest and indictment in this case.
Posted by Prince George's County Police at 12:10 PM