The Prince George’s County Police Department is investigating a non-contact shooting in Fort Washington.  Detectives would like to speak with anyone who may have information about this crime.

On April 20, 2013, at approximately 2:40 am, patrol officers were called to the 5200 block of Haras Place for the report of a shooting. Upon arrival, patrol officers spoke with the victim who was not hurt in the shooting.

The preliminary investigation reveals the three suspects were standing in the parking lot.  One of them pulled out a gun and fired several shots at the victim, who was standing on his balcony.  The suspects then drove away in a green Dodge Caravan, similar to the one pictured below. 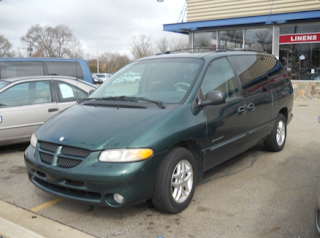 Anyone with information about this shooting is urged to call the RID-Southern District IV Investigative Unit at 301-794-5064.  Callers wishing to remain anonymous may call Crime Solvers at 1-866-411-TIPS (8477) or text "PGPD plus your message" to CRIMES (274637) from your cell phone. You may also submit a tip online at: http://www.pgpolice.org.
Posted by Prince George's County Police at 10:07 AM