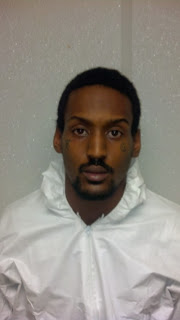 Updated December 21, 2013:  The Prince George’s County Police Department has arrested the suspect involved in this murder.  He is identified as 20-year-old Ronte Travell Muhyee, of the 1400 block of Southview Drive in Oxon Hill.

The deceased victim is identified as 29-year-old Douglas Antonio Romero Argueta, of the unit block of South Frederick Road in Gaithersburg.  The second victim remains hospitalized in critical but stable condition.

The preliminary investigation reveals Muhyee was involved in a confrontation with several workers in the area.  Muhyee shot Argueta and a second man, before running away.  A witness followed Muhyee, and was able to direct responding officers to his location.

Patrol officers found and took custody of Muhyee a short distance from the crime scene.  They also recovered the murder weapon.

Muhyee faces multiple charges related to shooting both men.  He remains in custody at the Department of Corrections.

The Prince George’s County Police Department is investigating a homicide in Upper Marlboro.

On December 21, 2013, at about 10:15 am, patrol officers were called to the 9600 block of Marlboro Pike for a shooting.  When they arrived on scene, the patrol officers found two men suffering from apparent gunshot wounds.  One of those men was pronounced dead on the scene.  The second victim was taken to a hospital in critical condition.

The preliminary investigation suggests a confrontation took place between the single suspect and a group of men working in the area.  During the confrontation, the suspect shot the two victims. He then ran away.

Detectives have identified and are questioning a person of interest in this case.