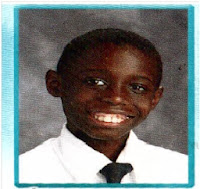 The Prince George’s County Police Department is seeking the public’s assistance in searching for a critical missing person. He is identified as 11-year-old Maleek Sohail Davis. Davis was last seen in the 500 block of Clovis Avenue on December 6, 2013 at around 10:00 am. Davis is on medication that needs to be taken daily.

Davis is described as an African-American male, 11-years-old, 3’11”, 55 pounds, with brown eyes. Davis was last seen wearing a white shirt, red vest, tan pants, and black shoes but may have changed into grey camouflage pants.

Anyone with information on his whereabouts is asked to call the Prince George’s County Police Department’s Regional Investigation Division-Central at (301) 772-4911.

Posted by Prince George's County Police at 9:17 AM