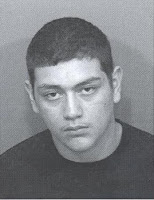 Prince George’s County Maryland… The Prince George’s County Police Department’s Homicide Unit has arrested 18 year-old Juan Josua Chavez in connection with the fatal hit and run collision of 34 year-old Manuel Mendoza that occurred early Saturday morning in Hyattsville, Maryland.
On September 24, 2011, at approximately 3:40 a.m., patrol officers responded to the 2000 block of University Boulevard for a report of a pedestrian struck by a vehicle. When the officers arrived, they found Mendoza, of the 2400 block of Lewisdale Drive in Hyattsville, Maryland, lying on the sidewalk suffering from trauma consistent with being struck by a motor vehicle. Mendoza was pronounced deceased at the scene.

Investigation revealed that there was an altercation earlier between a group of males who were exiting the Galaxy night club located in the same block. The group dispersed, and several males entered a Ford Explorer and drove onto the 2000 block of University Boulevard. The driver drove against traffic towards a group of males walking on the sidewalk and intentionally struck Mendoza. The Ford Explorer then fled the scene.
Detectives developed Chavez, of the 1700 block of Mt. Pisgah Lane, Silver Spring, Maryland, as a suspect. Chavez was later located along with the vehicle. He was placed under arrest, and subsequently charged with second degree murder and manslaughter.
Chavez has been remanded to the Prince George’s County Department of Corrections where he is being held on a $2,000,000 bond.

Anyone with information about this case is asked to call the Prince George’s County Police Department’s Homicide Unit at (301) 772-4925. Callers wishing to remain anonymous may call Crime Solvers at 1-866-411 TIPS (8477) or text “PGPD plus your message” to CRIMES (274637) on your cell phone or go to http://www.princegeorgescountymd.gov/police/ and submit a tip online.
Posted by Prince George's County Police at 6:16 PM

That was my boss brother!that got hit