Video of the news conference announcing a county employee arrest.

The Prince George’s County Police Department arrested a county employee on January 3, 2013.  The suspect is a Department of Environmental Resources (DER) building inspector.  He is charged with extortion and harassment.

The suspect is 52 year-old John Cleveland Brown of Clinton.  He was on duty, displaying his county ID and using his county car at the time of his arrest. 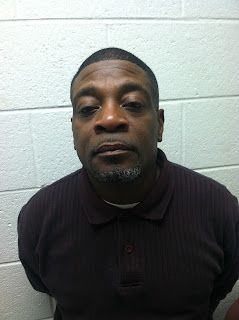 The preliminary investigation reveals the owner of a Clinton restaurant says Brown first approached him last March. Using his position as a building inspector, Brown tried to get the owner of Levi’s Restaurant to pay $1000 a week for the inspector’s band to perform at the restaurant.  The inspector threatened repeatedly to take away the restaurant owner’s permits unless the owner complied.  This occurred for months until the owner contacted police.  The business is located in the 6400 block of Coventry Way.

After meeting with the business owner and the State’s Attorney’s Office, detectives set up an undercover operation in which a police officer posed as the restaurant’s entertainment manager.  When the suspect came to the restaurant yesterday and demanded money from the undercover police officer, he was placed under arrest.

DER was aware of the police department’s investigation and worked with the department to ensure this matter was handled properly and efficiently.

This investigation is ongoing.  The Prince George’s County Police Department would like to hear from anyone who may have had similar interactions with Brown in the past.

All citations that this corrupt individual has issued should be reopened and investigated. There is a history of abuse of power and misconduct in Prince Georges Dept. of Environmental Resources. It has been my personal experience that DER supervisors cover up for their inspector's wrongful actions. This individual should never have been hired by the PG County govt in the first place. He has a history of questionable activity. Don't believe it? Look him up yourself on the Maryland Judiciary Case search. http://casesearch.courts.state.md.us/inquiry/inquirySearchParam.jis