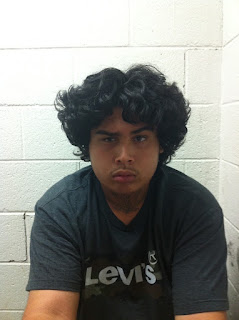 The Prince George’s County Police Department apprehended a suspect after he robbed a 63-year-old woman in College Park. The suspect is identified as 18-year-old Johnny Alejandro Turcios of the 1800 block of Keokee Street in Langley Park.

On June 19, 2013 at approximately 11:10 am, patrol officers responded to Guilford Road near Wake Forest Road for the report of a strong-arm citizen robbery. Upon arrival, patrol officers spoke with the victim, who said she had just been robbed of her iPad.

The preliminary investigation reveals the woman was approached by Turcios as she was walking home. Turcios assaulted the woman, and then struggled with her as he attempted to steal the woman’s purse. The woman was able to retain her purse, but the suspect was able to flee with her iPad. A City of College Park Parking Authority officer attempted to intervene and directed responding PGPD patrol officers to the area where Turcios ran.

Patrol officers and a K-9 team were able to track Turcios to a shed in the 4600 block of Guilford Place, where he was arrested without incident. Turcios admitted his involvement in the robbery, and now faces charges of robbery and multiple counts of second degree assault.

The victim suffered minor cuts and bruises, and was treated on the scene.

Anyone with information about this case should contact the Prince George’s County Police Department’s Regional Investigation Division - Northern Region at 301-699-2601. Callers wishing to remain anonymous may call Crime Solvers at 1-866–411 TIPS (8477), text “PGPD plus your message” to CRIMES (274637) on your cell phone, or go to http://www.pgpolice.org
Posted by Prince George's County Police at 5:55 PM