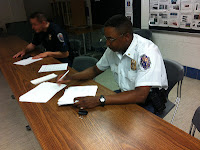 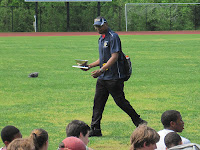 Lieutenant Kevin Hughes first put on the Prince George’s County Police uniform 25 years ago.  During that time, he’s become a well-respected member of the department.  He’s also made a name for himself in the other uniform he wears – that of head coach. The Washington Post recently named Lieutenant Hughes the track and field Girls’ Coach of the Year.  He’s the head coach at Georgetown Visitation Preparatory School in the District of Columbia.

Lieutenant Hughes says his love of running sparked his interest in coaching.  He’s coached now for 15 years. He spent one year at the University of Maryland and the remaining time at Georgetown Visitation Prep.  Under his leadership, the Cubs have earned eight championships, six of those for track and field.  This year, Coach Hughes guided the Cubs to a dominant showing at the ISL/MAC Championships. His team earned almost as many points as the next two teams combined, winning their fifth straight title.

Lieutenant Hughes credits his experience as a police officer with helping him excel at coaching—particularly conflict resolution, communication and organization. Lieutenant Hughes is currently a shift commander assigned to District I.