PGPD Takes to the Sky to Target Speeding Motorcyclists

The summer is the time many motorcyclists like to hit the open road.  Unfortunately, some drivers choose to do so at unsafe speeds.  To stop this dangerous driving, the PGPD launched Operation Road Runner.  The safety campaign uses an innovative approach to nab speeding motorcyclists by tracking them in the air.  The effort first launched last summer and was so successful, it’s back again this summer. 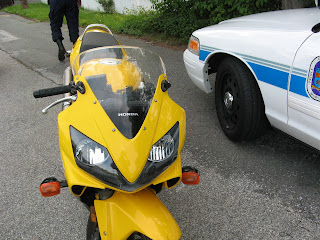 The Prince George’s County Police Department’s Special Operations Division uses several units to conduct this campaign; the Aviation Section and Traffic  Section.  A PGPD helicopter, Air 1, is used to spot and track any speeding motorcyclists.  The flight crew gives critical information to police officers on the ground to allow them to safely conduct traffic stops.
Operation Road Runner was most recently conducted on June 19, 2013.  In just a few hours,  police officers made 24 traffic stops and two felony arrests for a stolen motorcycle, fleeing and eluding, assault and other related charges.

A local news outlet joined the PGPD's Aviation Unit that day to see firsthand the effectiveness of  Operation Road Runner.

Posted by Prince George's County Police at 11:32 AM