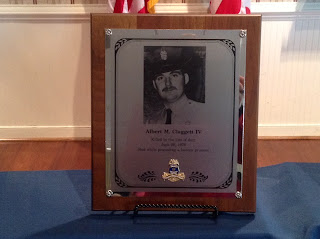 At approximately 1:30 am on June 26,1978,  Police Officer Claggett and Police Officer James B. Swart initiated a traffic stop of a vehicle on Annapolis Road at Kenilworth Avenue in Bladensburg.  The vehicle matched the suspect description in the theft of laundry room coin boxes from the Eastpines Apartment Complex. The two occupants were arrested and taken to the Hyattsville station.  As Police Officer Claggett was processing one of the suspects, the suspect suddenly ripped the officer's weapon from its holster and opened fire, striking POlice Officer Claggett in the chest.  He was rushed to Prince George's Hospital Center where he later died of his injuries.

At the time of his death, Police Officer Claggett was 26 years old and survived by his wife and two sons.

My ex-husband was a P.G. County police officer and we were close friends with his family, even going on vacation with them. We were devastated at his loss and I think of him often, now many years later. R.I.P. Rusty and I hope your family is doing well.
Pat Hunter Van Cleaf