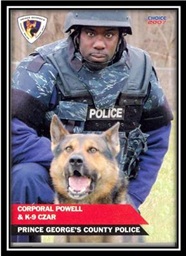 We regret to inform you of the passing of K9 Czar on November 26, 2011.  K-9 Czar’s career began in May 2003 as a Patrol Canine.  In 2004, Canine Czar was tasked as an EST dog, he continued this role until 2009.  Canine Czar received numerous certifications from NAPWADA, Maryland State Police and Blackwater K9.  He was certified as a CDS and Patrol dog assigned to Sgt. Willie Powell #2292 of the Canine Section.  During his career he had numerous apprehensions and several seizures.  He also located money and CDS during his watch.  Canine Czar was retired from service September 4, 2011.   Canine Czar will be truly missed.
Posted by Prince George's County Police at 11:47 AM

So sorry for your loss .

To Sgt. Powell, the Canine Unit, and the Prince George's County Police Department, I am truly sorry for your loss if Czar. My father, John Dempsey
(RIP), had been a canine officer with the Metropolitan Police Department.