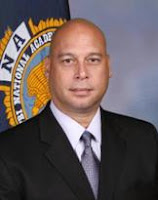 The FBI National Academy is an eleven week leadership program for national and international law enforcement officials that is designed for military and federal agency managers and is held at Marine Corps Base, Quantico, Virginia.
Major Person was part of Session 247 which began with 270 participants from 49 states and 25 countries. The training consisted of academic courses from constitutional law to media relations and included physical training four days a week.
As part of the physical training, Major Person participated in the Yellow Brick Road Challenge that consisted of a 2.9 mile obstacle course through wooded terrain and ended with a 5K (3.2 miles) run.
Major Person has since returned to his position as commander of the Training and Education Division for the Prince George’s County Police Department where he has been proudly serving the agency for over twenty-one years.
Posted by Prince George's County Police at 9:05 PM

Way to go Mark. That is a tough academy. You set an example for others to follow.