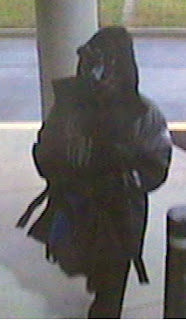 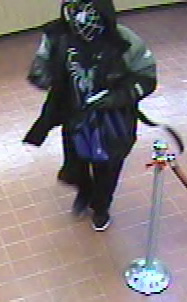 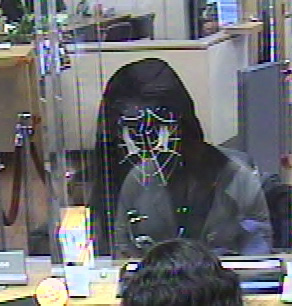 Prince George’s County, Maryland…The Prince George’s County Police Department’s Robbery Unit is seeking the public’s assistance in identifying an individual wanted in connection with the robbery of the BB&T Bank in Fort Washington, Maryland earlier today.
At approximately 3:18 p.m., the suspect walked into the BB&T Bank located in the 9400 block of Livingston Road wearing a mask and attempted to gain entry into the back portion of the bank which was locked. The suspect then approached the teller window and passed a note demanding money while displaying a handgun. The bank teller, in fear, complied with the suspects’ demands and handed him an undisclosed amount of money at which time he fled the bank and got into a dark colored Chrysler Pacifica style vehicle and fled towards Oxon Hill Road.
The suspect is described as an unknown race male in his 20’s, around 5’5”-5’7” tall, and weighing between 150-170lbs. He was last seen wearing a black and gray “North Face” jacket, a black hooded “Spider Man” sweater with a spider on the chest, a “Spider Man” mask with a white web design, black shoes with white soles, gloves, a blue canvass bag, and armed with a silver handgun.
Anyone with information about the suspect is urged to call the Prince George’s County Police Department’s Robbery Unit at 301-772-4905. Callers wishing to remain anonymous may call Crime Solvers at 1-866-411-TIPS (8477) or text “PGPD plus your message” to CRIMES (274637) on your cell phone or go to http://www.princegeorgescountymd.gov/police/ and submit a tip online. Surveillance camera photos of the suspect are attached.
﻿