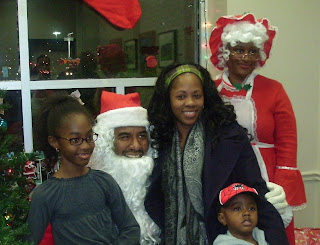 The party took place on December 22, 2011, as children from the community celebrated the day by taking pictures with Santa and Mrs. Clause and by also receiving gifts.  They also feasted on pizza provided by police officers.

"It was great to see the smiles on the faces of all the children who came.  I'm so happy that we can be a part of an event that makes such an impact on the children of our communities," said Major James Harper.