Update July 22, 2015: On Sunday morning at 10:00 am, our detectives recovered the 2012 black Dodge Charger the suspect(s) drove during the fatal shooting. It was parked on 45th Street in Northeast DC near Kenilworth Gardens. Detectives would like to speak with anyone who may have any information on this car which had paper, temporary tags. We know that this car was reported stolen. Detectives have canvassed the crime scene in Capitol Heights with this Crime Solvers flyer. Anyone with any information on this fatal shooting is urged to call 1-866-411-TIPS. 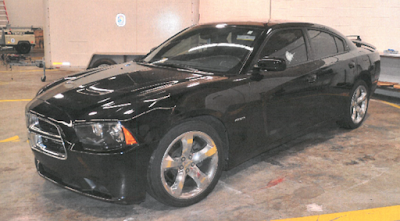 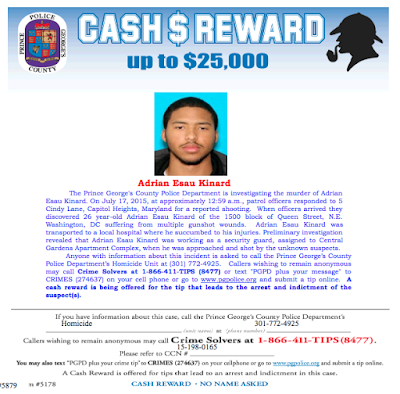 The Prince George’s County Police Department is investigating an early morning homicide in Capitol Heights. The victim is 26-year-old Adrian Kinard of Queen Street in Northeast DC. A reward of up to $25,000 dollars is being offered in connection with this case.

At about 1:00 am, patrol officers were called to an apartment complex in the unit block of Cindy Lane for a shooting. When they arrived, they found Kinard and a second security guard suffering from gunshot wounds. The victims were each shot while at their personal cars parked at the complex. Kinard died of his injuries at a hospital. The second victim suffered non-life threatening injuries.

Preliminarily, detectives do not believe this was a random act. Detectives are working to identify a motive and a suspect(s) in this fatal shooting.