Our first Wanted Wednesday suspect was caught on crystal clear surveillance video the night he robbed a Landover Hills convenience store. The suspect—wearing a Pittsburgh Steelers jersey—targeted the store on July 14th at midnight. He jumped the counter and pulled out a gun. He ran from the store with several boxes of cigarettes. Please call us with any details about this suspect. Tipsters can call 301-772-4905 or Crime Solvers at 1-866-411-TIPS.

We don’t think Walt Disney would approve. This next suspect wore a Mickey Mouse t-shirt the night he tried to rob a gas station in Oxon Hill. On July 10th around 8:00 pm, this suspect pulled out a gun and demanded cash at a station in the 6300 block of Livingston Road. He ultimately ran away without any money. If you know where we can find him, please call 301-772-4905 or Crime Solvers at 1-866-411-TIPS. Tipsters are eligible for a cash reward and won’t have to give their name. 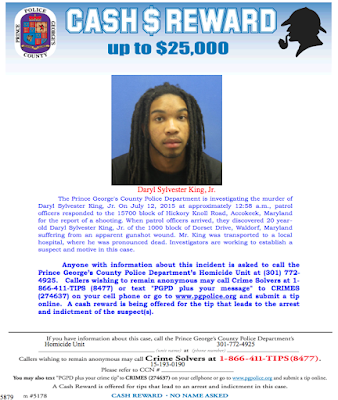 We are asking our community to please call us with any information on a homicide in Accokeek early Saturday morning. The victim is 20-year-old Daryl Sylvester King Jr. of Dorset Drive in Waldorf. At about 1:00 am, patrol officers were called to the 15700 block of Hickory Knoll Road for a shooting. When they arrived, they found King outside suffering from a gunshot wound. He died a short time later at a hospital. Preliminarily, the investigation reveals King was shot shortly after leaving a nearby party. Call 301-772-4925 or Crime Solvers at 1-866-411-TIPS with any information. A reward of up to $25,000 dollars is being offered in connection with this case. 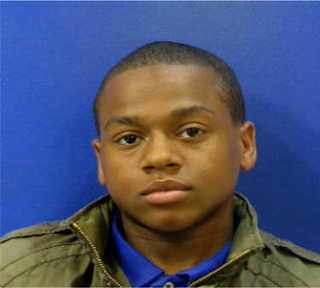 Our Robbery Unit detectives would like to speak to this person of interest in connection with an armed robbery in the 3400 block of Little Hill Lane in District Heights back in February. The person of interest is 18-year-old Maurice Malik Banks of no known address. The suspects stole cash and personal property from three victims. No one was hurt. Please call 1-866-411-TIPS with any information on his whereabouts.
Posted by Prince George's County Police at 12:06 PM