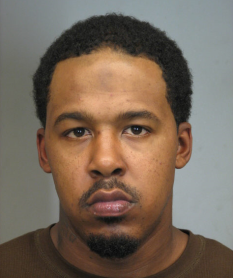 The Prince George’s County Police Department obtained an arrest warrant and is actively searching for a suspect in connection with a sexual assault in Mitchellville in late April. He’s 34-year-old Michael Deangelo Harris of the 3300 block of Curtis Drive in Suitland. Anyone with information on his whereabouts is urged to call 1-866-411-TIPS.

On April 29, 2015, at about 5:40 am, a man sexually assaulted a woman in the 11000 block of Lake Arbor Way. Our investigation reveals the suspect approached the 19-year-old victim as she was walking and forced her into a nearby field where he sexually assaulted her. He implied he had a gun. 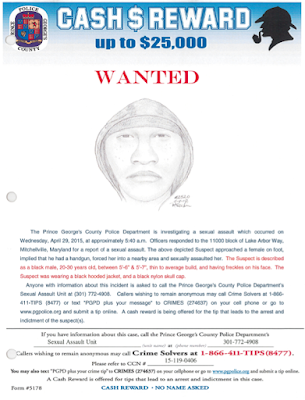 Following the assault, detectives canvassed the area with Crime Solvers flyers containing a sketch of the suspect. During the course of the investigation, Harris was developed as the suspect. He’s charged with first and second degree sexual offense and assault charges.

Anyone with information on this suspect or where we can find him is urged to call the CID Sexual Assault Unit at (301) 772-4908. Callers can remain anonymous by calling CRIME SOLVERS at 1-866-411-TIPS (8477). You may also text “PGPD plus your tips” to CRIMES (274537) on your cell phone or go www.pgcrimesolvers.com and submit a tip online.
Posted by Prince George's County Police at 12:07 PM