Search Underway for Suspect Who Injured Our Officer in Oxon Hill

UPDATE July 17, 2015: Detectives are working to identify this person of interest in connection with an assault on our patrol officer in Oxon Hill Thursday morning. If you know his identity, please call our detectives at 301-749-5064 or Crime Solvers at 1-866-411-TIPS. You will not have to give your name. 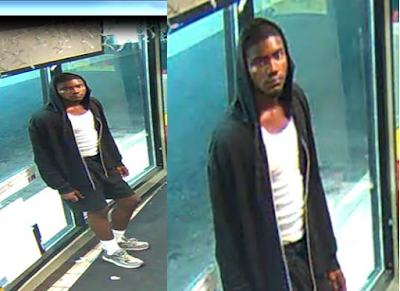 Second of Two Separate Attacks on PGPD Officers in 8 Hours

A search is underway for the suspect who injured one of our District IV patrol officers in Oxon Hill early this morning. This is the second attack on one of our officers in just eight hours.

At about 1:15 am, the officer, who was in a marked police cruiser, tried to make an investigatory stop on a stolen car in a gas station parking lot in the 4400 block of Wheeler Road. As the officer walked toward the car, the suspect accelerated, hitting the officer and causing him to flip onto the hood. Thankfully, he suffered minor injuries and has been released from the hospital. The suspect continued to flee and was last seen heading into DC. The suspect’s car is described as a gold 2008 Subaru Outback. It has DC tags DT2586.

The injured officer is a Gold Medal of Valor Award Winner stemming from an incident on Branch Avenue in 2014 involving the murder of a three-year-old girl at the hands of her father.

Anyone with information on this assault of our officer is asked to call detectives at 301-749-5064 or Crime Solvers at 1-866-411-TIPS. You will not have to give your name.
Posted by Prince George's County Police at 1:19 PM