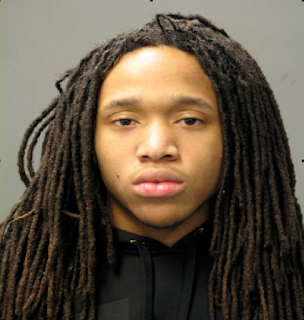 UPDATE May 25, 2013:  The second suspect wanted for an armed carjacking in District Heights on May 23, 2013, is identified as 20-year-old Christopher DeWayne Barnes of the 1500 block of Alabama Avenue in Southeast Washington.  Anyone with information on his whereabouts is urged to contact the Regional Investigation Division - Central Region at 301-772-4425 or CRIME SOLVERS at 1-866-411-TIPS (8477).  A CASH REWARD is being offered for information leading to an arrest and indictment in this case.

The Prince George’s County Police Department arrested a teenager for an armed carjacking that resulted in multi-vehicle crash in the District.  The suspect is identified as 17-year-old Malik Hasaam Wilkins of the 5300 block of Clay Terrace in Northeast Washington.  He is being charged as an adult.

On May 23, 2013, at approximately 7:30 am, patrol officers were called to the 2200 block of Seton Way in District Heights for the report of an armed carjacking.  Two masked men had approached the victim as he sat in his car.  Both suspects pulled out a gun and demanded the victim’s vehicle.  The victim complied.  He was not hurt.

Within minutes of the call, an alert PGPD patrol officer spotted the carjacked vehicle on Southern Avenue and attempted to stop the car.  The suspects fled, crossing into the District.  As the suspects tried to make a turn onto Texas Avenue in Southeast Washington, the driver lost control and struck a car waiting at a red light.  The passenger in that car was taken to the hospital for observation.  After this collision, the suspects continued to flee and hit a school bus with three students on board.  Their injuries are minor.  At this point, the two suspects jumped out the carjacked vehicle and tried to run.  Officers caught and arrested Wilkins.  The second suspect was able to get away.  Officers recovered a handgun on the scene.

Wilkins is charged with armed carjacking, fleeing and eluding and a weapons charge.  He is currently in custody in the District awaiting extradition to Prince George’s County.

Anyone with information on this case or the identity of the second suspect is urged to call the Regional Investigation Division – Central Region at 301-772-4910.

Posted by Prince George's County Police at 9:00 AM