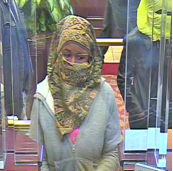 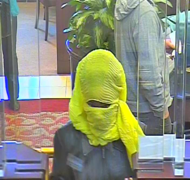 The Prince George’s County Police Department is working to identify the suspects seen in the above surveillance photographs.

The preliminary investigation reveals the two suspects passed notes demanding cash to two different bank tellers.  Both tellers complied.  The suspects got away with an undisclosed amount of money.  They were seen fleeing in a tan Chrysler Concorde.

The first suspect is described as a black female, 5’4”, 130 lbs, in her late 20s.  She wore a fluorescent green scarf around her head and face, a black leather jacket, a brown glove on her right hand and was carrying a large black handbag.

The second suspect is described as a black female, 5’7” 180 lbs, in her late 20s.  She wore a brown and burgundy patterned scarf around her head and face, a gray hooded jacket, a pink shirt, charcoal sweat pants and white shoes with black stripes.

Anyone with information on this investigation is asked to call the CID Robbery Unit at 301-772-4905. Callers can remain anonymous by calling CRIME SOLVERS at 1-866-411-TIPS (8477). You may also text “PGPD plus your tips” to CRIMES (274637) on your cell phone or go to www.pgpolice.org and submit a tip online. Crime Solvers is offering a cash reward up to $1000 for tips that lead to an arrest and indictment in this case.

Posted by Prince George's County Police at 11:11 AM

I mean at least if ur gonna try to dress like the Taliban, put the whole outfit on, not just the head-piece, smh. Athletic wear & a burqua don't mix, lol, not to mention a neon-colored one. How stupid are these young criminals nowadays? Why would u DRAW attention to yourself during a heist? I would've pushed the alarm buton as soon as I saw these 2 nutjobs walk thru the door looking like that, smh.