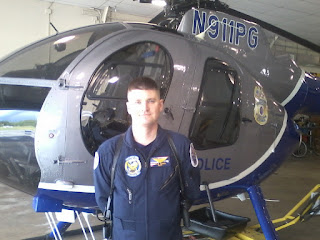 The Prince George’s County Police Department is proud to announce that Corporal Ben Conner is the PGPD’s newest and youngest Pilot-in-Command.  He earned the title on May 8th, 2013, which also happened to be his 30th birthday.  The accomplishment capped off nine months of intensive training.

Corporal Conner has long had an interest in aviation.  In 1997, at the age of 16, he was given his first familiarization flight by PGPD Corporal Steve Grimes.  Corporal Grimes was on hand yesterday to congratulate Corporal Conner upon his landing.

Corporal Conner earned his fixed wing license in Bowie and became an instructor for many years.  In 2009, he joined the US Army Reserves, allowing him to continue his aviation training, both at Fort Eustis, Virginia, and Fort Rucker, Alabama.   The seven-year PGPD veteran is currently assigned to the Special Operations Division’s Aviation Section.