On Memorial Day, we pause to honor and pay tribute to the sacrifice that so many men and women have made while serving in the United States Armed Forces.  While those across the country take time to remember our fallen heroes this Memorial Day, the Prince George’s County Police Department will be doing the same. 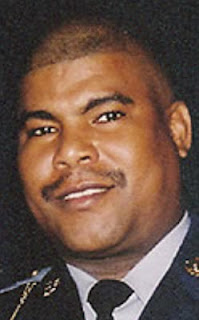 Our very own Corporal Robert Hernandez was killed in 2006 while serving in Iraq. A Staff Sergeant with the US Army, Robert Hernandez was killed in Al Taquaddum, Iraq, when an improvised explosive device detonated near his vehicle during combat operations.  He is the only member of the PGPD to be killed in combat while serving our nation.
Cpl. Hernandez served the Prince George’s County Police Department for ten years and was assigned to District II prior to his deployment.  He was 47 years old at the time of his death, and is survived by his fiancee and three children.
Posted by Prince George's County Police at 1:47 PM