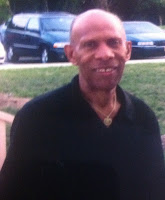 The Prince George’s County Police Department is seeking the public’s assistance in finding a critical missing person. He is identified as 82-year-old Richard Walter Haynes of the 1000 block of Brightseat Road in Landover. He was last seen leaving his home on May 23, 2013. Haynes suffers from high blood pressure and may be in need of medication.

Haynes is described as a black male, 5’6” and 175 pounds. He was last seen wearing a blue jacket and khaki pants. Haynes may be operating a 1994 two door green Cadillac Eldorado with Maryland Tags 03427AE.

Anyone with information on his whereabouts is asked to call the Prince George’s County Police Department’s Regional Investigative Division Central (District III) at 301-772-4911.