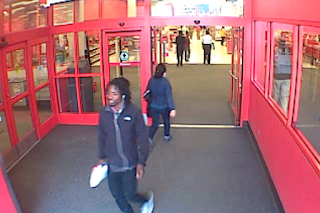 The Prince George’s County Police Department is seeking the public’s assistance in identifying the suspect seen in the above surveillance photograph. He is wanted in connection with a residential burglary.

On May 14, 2013, police officers responded to the 6500 block of 43rd Avenue in University Park for a breaking and entering report.
The victim discovered that several credit cards were taken during the burglary.  Detectives determined the suspect then used the credit cards at several area businesses, including the Target in Greenbelt as shown above.

The suspect is described as a young African American male with a slim build and shoulder-length dread locks.  He was last seen wearing a black jacket and black jeans.

Anyone with information on the suspect’s identity or whereabouts is urged to call the Prince George’s County Police Department’s RID-North/District I Investigative Section at (301) 699-2601.  Callers wishing to remain anonymous may call Crime Solvers at 1-866-411-TIPS (8477), text, “PGPD plus your message” to CRIMES (274637) on your cell phone or go to www.pgpolice.org and submit a tip online.
Posted by Prince George's County Police at 1:16 PM